I’ve been writing about music all over the world for the past 3 years, meeting artists from Vienna, Australia, Japan and more. Having the honour to write about their art was more than enough incentive to keep the blog going as it fueled my passion for music journalism. So I figured this would be the perfect time for me to look back and write about the talent that resides in my own home country – Malaysia.

Thus, Mesti Malaysia is born – a segment where I help recount the career of the artists featured, giving you a look at the lives and stories of musicians making a name for themselves in this country.

So without further ado, let me introduce you to the segment’s first guest – LUST!

Comprised of Azfar Abu Bakar and Faris Khairi, who hail from Kuala Lumpur and Johor Bahru respectively, the band has gone through several revisions to get to where they are today. First connecting through mutual friends, LUST was formed as a 4-piece group. “But you know how life goes, two of us parted ways and it’s only [recently] that we agreed to move on as a duo. Lean, mean, music machine,” as they told me.

2016’s Chingichanga EP was the band’s first release as a quartet. It was an exciting time as they searched for their original sound while attempting to satisfy the expectations they had for their music. “We didn’t have any grand vision or ideas…it was a ‘throw stuff at the wall and see what sticks’ kind of creative process.”

“There was a vague theme of “rojak-ness” [note: messiness] while making something disgusting [and] sexy,” they added. A theme that’s also reflected in their cover art – a mix of food ingredients that would have undoubtedly made abnormal meal. Though like the bright and chaotic impression leaves, LUST’s early music was just that – witty and intricate.

Chingichanga made quite a splash when it dropped, with Malaysian paper The Star describing it as an addictive listen while Bandwagon praised it as “a colourful, offbeat debut, brimming with personality from a band we know little about.” The short project was a great showcase of how LUST stood out against the local rock-centric music scene of the time.

When asked to recall how the recording of the EP went, the group looks back on it fondly. “It was fun. Early days are a blur but what we can remember is always sweet. We were wide eyed – every jam session felt like a breakthrough, we were super productive and it felt exciting.”

A Renewed Focus And Direction

The good times kept going on their debut album – 2019’s Tekesima; an album that mirrors their biggest musical influences in The Strokes and Animal Collective – “the former for it’s sharp musicality and the latter for its totally fluid, weird earnest sounds.”

However like Chingichanga, the album’s sound wasn’t set in stone from the get-go.

“It started with Faris’s demos of a couple songs and that became the blueprint of the Tekesima sound. We’re not really the kind of band that discusses themes and concepts too heavily in the songwriting process. Whatever the writer wants to write about, go ahead.”

When LUST began working on the record’s visuals alongside Tekesima’s Creative Director Amir Johari, it was clear which direction the band aimed to take the album in. “We started to think about how artists can strive for perfection so much so that they become trapped within their own creations, and that sparked a domino effect of ideas.”

‘Tekesima’ in Bahasa Malaysia means being shocked to the point of being speechless. It encompasses the band’s feelings towards the end of their naïve youth as they transition into an adult society that’s oppressively overwhelming. Though again, LUST didn’t write every song with this message in mind.

In an interview with Masses, the songs’ indiscriminate nature are tied together by a “central theme of us being in our late 20s just being kinda like ‘wei shit we can’t act like fucking teenagers anymore’.”

The reception to Tekesima was positive too, notably nabbing the band their first Album Of The Year win at the TAPAUawards. Not long after, they also scored a spot in one of Malaysia’s most prestigious music festivals – Good Vibes; playing alongside internationally renowned acts like Joji and Daniel Caesar.

“It definitely felt a bit out of place for us who have been used to only playing at small gigs and venues, but we took it in stride and had a lot of fun on and off stage. It’s pretty nuts. Up there as a career highlight for sure.”

“We are not big fans of repeating ourselves. Not to say that we intentionally veer away from previous sounds we’ve done but it simply feels natural for us to explore new sounds and textures going into each new project.”

With that motto, LUST followed up Tekesima with a remixed version – Re:Tekesima. Working with “music buddies, to bands we shared a stage with, to our musical heroes, and to producers who were actively keen on doing a remix for our tracks”, it was a neat side project that proved the band wasn’t about to be pigeonholed into just the indie rock genre.

Their latest release – Vantablack, is an electronic music-inspired EP that keeps the wayward energy of past releases but repackages it under a more streamlined sound.

Despite losing two of their members, the duo still built the EP off 2 leftover tracks from the Tekesima sessions (“Hedonist” and “Super Trial”). The band couldn’t let a budding concept go to waste as they decided to build a whole thematic universe around the sounds of those tracks.

“It just so happened that it was during the first MCO, a period of time in 2020 that was full of uncertainty and anxiety. Going through all that landed me on the concept of calling it ‘Vantablack’, a material that absorbs almost all light – sort of mirroring the black hole that is our minds in that time.”

With that, they’ve been able to circumvent the expectations set for their next album. LUST’s willingness to innovate is commendable as is they’re ability to work with their collaborators to pull off their very impressive visuals.

It sets them up as one of Malaysia’s most exciting musical acts to date and I can’t wait for what they have in store for us next.

There’s a lot to be said in a cover art, but few artists can depict the actual album listening experience through them.
Tyler, the Creator is coming out with a new album soon so I thought of reminding you guys why I love the man’s music so much.
I had the pleasure of talking to Indonesia pop singer Rama Davis a couple weeks back 🇮🇩
Lorde has always been lauded as a genius by fans and critics alike. So it’s only right that her latest single’s cover art “Solar Power” holds the same amount of depth 🤔
Brought back 1st listen reviews for June and I talked about 6 of my favourite 2021 albums so far 🙇‍♂️
INTERVIEWS ARE BACK and they’re up on YouTube 🤑🤑 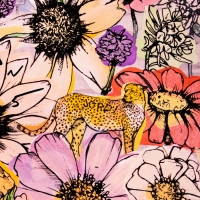